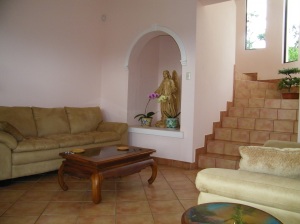 In the winter of 2005, a friend was vacationing on the Pacific coast of Costa Rica. He implored me to come, saying that I would be enchanted.

It was a life-changing week. Under the sway of sea breeze and tropical light, deep feelings surfaced and a marvelous healing. My son had died less than two years before. I want to live here, I thought, and vowed to come back.

That spring I returned to look for land. Another friend suggested the Central Valley, where it is cooler, mountainous and lush. He knew of a cabdriver who would take me around.

Each morning Mamo, the cabdriver, picked me up and away we would go, driving the back roads of the Central Valley, looking for property, knocking on doors. I bought farmland in the agricultural belt above the sweet highland town of Atenas.

The soil, planted in peanuts, breathed a rich reddish hue and sloped gently down toward tree-dotted fields disappearing into velvety green mountains—wide open country. Standing on the land, my heart opened up. I returned that summer to begin building a house.

In those early years of loss, while the field was being cultivated into a garden, I could feel Chris’s presence in an almost tangible way, as if he had led me there. The heavenly light of the tropics and a profound sense of peace pervaded my home. I sought a local sculptor to carve an angel in Chris’s likeness.

Seven years have passed since first stepping foot on land that promised a home. Today I was feeling a little sad, seeing how the garden, though glorious, has grown up, the treetops partly concealing the mountain vista, the peanut plants long gone. And there is development—street lights along the rustic road…. I thought, How in the world can you complain? But I sensed there was something else going on, as in, All of life is in flux, constantly changing.

The early years of loss was a magnificent time, in a way. There were years in healing; there is no description for a mother’s broken heart. But so dear and precious, so divinely inspired, as if God was right there with me. In the depth of my grief, I found Costa Rica. And suddenly, looking around at the garden, I was faced with remembrance, realizing life had moved on. An era had ended, the new one not yet defined. The feeling of peace still pervades, yet something has changed. Was I grieving the loss of those magical, albeit painful years, when an invisible thread connected me to Heaven?

I wonder where the new life leads. I have a precious daughter, the light of my world. There are cherished friends. Beyond that, it seems more to do with a mystical path. I dream of a golden life for the golden years.

This morning, before the sun peaked above the mountains, in the cool, fragrant air, I was having an animated discussion with my gardener, when I began listening to the pure music of his voice and native tongue. For a moment, I stood, utterly spellbound. Therein lies the path, I thought later.

Often I hear my son speaking to me, in the way he spoke in life, simple observations accompanied by that little chuckle. Mom, it’s easier than you think. It’s just little things that make up a good life. You don’t have to figure things out or even have a plan. You just have to be present for the unfolding.

Freedom to Fall is a book about the life of my son as a rock climber intertwined with my life as a bereaved mom. To read more about it or to order a copy, click on the appropriate link above.