After my son died while rock climbing in Yosemite National Park, May 2003, I ventured into his world. I wanted to understand why climbing had been the heart of his life. Why would he have done something so risky that it could take him from us forever, especially since he knew I loved him so?

I learned that climbing for Chris had been an impassioned expression of a spiritual path. High up in the elements, moving across stone, Chris had felt a deep abiding connection. As his best friend, Greg, told me, “Chris climbed for the pure joy of the act itself. He was acutely aware of the ‘spirit of the mountains,’ an intuition that was obvious in his art form—that of dancing on rock.”

In January 2004, for Chris’s birthday, Greg, his girlfriend Sarah, and I traveled to the climbing site of Joshua Tree National Park in Southern California. The scene was stark: granite monoliths rising out of a sandy plain studded with the twisted, spiked Joshua trees, resembling shrunken palms. The days were an immersion in sun, wind, and rock, as I watched Greg and Sarah climb, the nights fiercely cold. As we sat around the camp fire, Greg talked about his climbing partnership with Chris. They had come of age exploring the South Platte River Basin in Colorado. “Back in those remote mountains, Chris would often say, ‘I feel at home here.’ It was quality rock, a lot of adventure, and just that sense of solitude, when you’re the only one for miles and miles….”

END_OF_DOCUMENT_TOKEN_TO_BE_REPLACED

The loss of my son caused a fundamental shift in my approach to life. If what was most precious could be taken away, then what was life for? Why was I here? It seemed as though God was holding a vision for awakening to a truer life.

We create our lives in partnership with God. For Chris’s sake, I wanted to see what was possible to make the best of his passing.  And if this experience was potentially life-changing, I wanted to step to the plate.

Losing Chris taught me what is important in life. I gave up trying to prove myself, to garner accolades or recognition. I stopped seeking life or trying to reap benefit or advantage. I settled down into the person I am, the life I have, and the little gifts that abound. I became more giving of myself. I opened up to a life founded in love.

In finding a more authentic life, I was able to keep my bond with Chris alive. The love that shone brightly for Chris also allowed me to heal. It allowed me to eventually step beyond the borders of grief to connect more deeply to life in the surroundings, to awaken to my humanity.

Losing Chris helped simplify my life. It revealed how fragile life is: hopes and dreams can shatter in an instant. It showed me what can never break. It is not God’s desire that we continue to suffer. God wants us to discover the truth about life—the gem at the center that allows us to thrive.

The Road to Recovery

Looking back on the time of grieving the loss of my son, I feel gratitude for the experience. There will always be times of sadness, but the gains are immeasurable.

On the first day of knowing my son was gone forever, when I took to my bed with a broken heart, certain truths rose from within: Only good can come from love. Chris will be with me always. There is meaning and purpose behind his death. In the months that followed, I held onto the insights of that first day. They became my guide, my faith, my eventual resurrection.

The Road to Recovery

Grief, in those first unbearable months would come in waves. In moments of relief, I could feel Chris’s loving presence. He didn’t exist in our time anymore, but as a spirit in eternal time. Though I didn’t know if that sense could last, it was a revelation—the saving grace. I learned that my two states of awareness, that of Chris’s absence and his presence, could not exist side by side, but only in succession. Surrendering wholeheartedly to the pain of loss, allowing it passage, opened a door into God’s realm.

END_OF_DOCUMENT_TOKEN_TO_BE_REPLACED

Taking a Step Back – My Story

Though I’ve kept up this blog for a while now, I feel led to bring you all into me – into my life and my story. I’ve recently published a book titled Freedom to Fall, which chronicles my journey to healing after losing my son Chris. This is me.

I am beginning work to publicize the book and share my story with whomever will find it. Here’s to new beginnings.

Taking a Step Back – My Story

Born and raised in Louisiana, I followed my heart to Colorado, where I attended the University of Colorado and pursued a career in Special Education.  After marrying and moving to the mountains to raise a family, I discovered a calling as a storyteller, performing original stories as well as myths and legend from world cultures.  Ultimately, I divorced, and after my two children left home, I made my way down the mountains, landing in Denver around the turn of the century. Then in 2003, something happened that changed my life.

In May of that year my daughter, Kate, who was in college, had come home for the summer. Chris was rock climbing in Yosemite National Park.  On June 1 we were awakened in the night with the news that Chris had been in climbing accident and was dead. 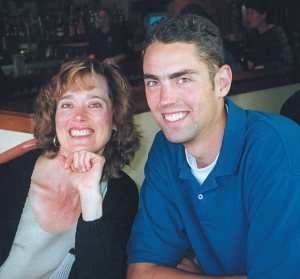 The devastation and shock of that summer was soothed by the presence of my daughter and by an abiding faith. I knew intuitively that Chris was still with me and always would be. I felt there was meaning behind his passing. I wrote every day about the raw emotion of grief coupled with whatever insights came. Those journal notes became the basis for  Freedom to Fall, which I began that autumn.

The book chronicles my journey through the first two years of grieving, along with a portrayal of my son in a way that captures his spirit. Just as all people have special qualities and gifts, I felt that Chris, for his 25 years of living, had much to offer in the way he loved life.

The hard times of those first two years were also times of hope and redemption. I discovered the healing power of love. I did not think that my life was over. I knew that I would fully live again, and through that belief, found my way.

Writing the book was cathartic, and the blessing was in realizing that the book could be an inspiration and comfort to others. Today, ten years after Chris’s death, I am standing on solid ground.  Of course I miss my son, but we have a relationship that endures. He is my angel in Heaven.

I choose to write a blog to communicate with like-minded people. In these times when families are often spread out and neighbors may be strangers, I can’t think of a more uplifting way to establish community than through the simply act of sharing stories and ideas through writing. I write first thing every morning; it is the mainstay of my life, and I look forward to making connections.